Friday of the Tenth Week in Ordinary Time. Solemnity of the Most Sacred Heart of Jesus. The reading is from Gospel of John 19:31-37. 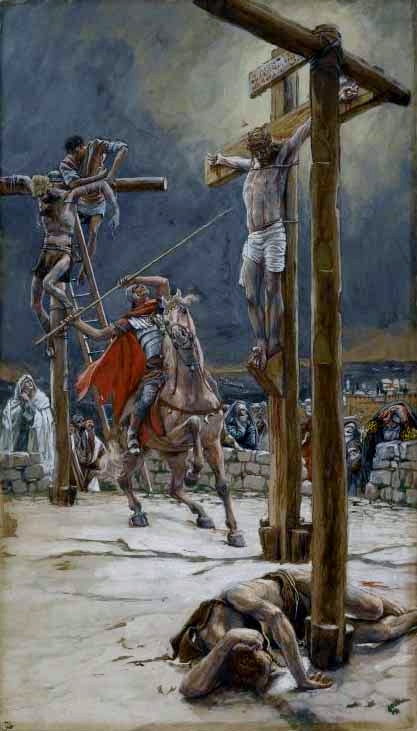 A Soldier Pierces Christ’s Side by James Jacques Tissot

Now since it was preparation day, in order that the bodies might not remain on the cross on the sabbath, for the sabbath day of that week was a solemn one, the Jews asked Pilate that their legs be broken and they be taken down.

So the soldiers came and broke the legs of the first and then of the other one who was crucified with Jesus.

But when they came to Jesus and saw that he was already dead, they did not break his legs, but one soldier thrust his lance into his side, and immediately blood and water flowed out.

An eyewitness has testified, and his testimony is true; he knows that he is speaking the truth, so that you also may [come to] believe.

For this happened so that the scripture passage might be fulfilled: “Not a bone of it will be broken.”

And again another passage says: “They will look upon him whom they have pierced.

also in Exodus we read the rules for observing the Passover ritual:

Hence the body of Jesus was brought down from the cross and entombed in a hurry.

John probably emphasizes these verses to show the reality of Jesus’ death, against the Docetist heretics (see note below).

In the blood and water there may also be a symbolic reference to the Eucharist and baptism.

It is not certain from the Greek text that this eyewitness is he, John himself. And in the final part of this sentence he says “may [come to] believe.”

A Note on Docetist heretics

Eusebius of Caesarea (c. AD 263 – 339) also called Eusebius Pamphili, was a Roman historian, exegete and Christian polemicist. He became the Bishop of Caesarea in Palestine about the year 314. Eusebius refers to three works of Serapion, Patriarch of Antioch (AD 191–211), known primarily through his theological writings. Eusebius quotes (vi.12.2) from a pamphlet Serapion wrote concerning the Docetic Gospel of Peter, in which Serapion presents an argument to the Christian community of Rhossus in Syria against this gospel and condemns it:

Docetism (from the Greek δοκεἲν/δόκησις dokein (to seem) /dókēsis (apparition, phantom), is broadly defined as any teaching that claims that Jesus’ body was either absent or illusory. His humanity and suffering only seemed to be real.

Norbert Brox, defines “Docetism” narrowly as “the doctrine according to which the phenomenon of Christ, his historical and bodily existence, and thus above all the human form of Jesus, was altogether mere semblance without any true reality.”

Docetist heresy emerged in about 110 AD.

Docetism was unequivocally rejected at the First Council of Nicaea in 325 AD and is regarded as heretical by the Catholic Church, Orthodox Church, and many others.

The Qur’an has a docetic or gnostic Christology. It views Jesus as a divine illuminator rather than the redeemer of Pauline Christianity. In Sura 4:157–158 it is written:

And [for] their saying, “Indeed, we have killed the Messiah, Jesus, the son of Mary, the messenger of Allah.” And they did not kill him, nor did they crucify him; but [another] was made to resemble him to them. And indeed, those who differ over it are in doubt about it. They have no knowledge of it except the following of assumption. And they did not kill him, for certain. (Sura 4:157)

Rather, Allah raised him to Himself. And ever is Allah Exalted in Might and Wise. (Sura 4:158)

The Qur’an was compiled in the mid-seventh century AD (around 650 CE), corresponding to the period when docetism was still commonly accepted and taught among some Christian sects.

3 thoughts on “Immediately Blood and Water flowed out.”