Tuesday of the Tenth Week in Ordinary Time. The reading is from the Gospel of Matthew 5:13-16. 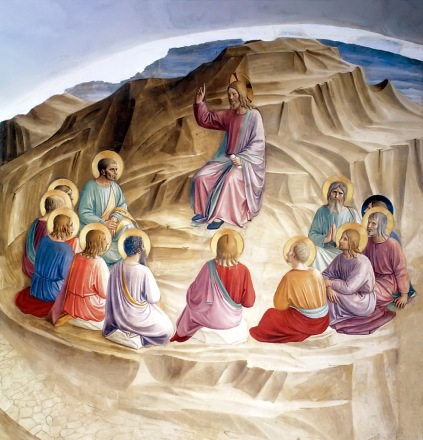 The Sermon on the MountFra Angelico, c. 1440

You are the salt of the earth. But if salt loses its taste, with what can it be seasoned? It is no longer good for anything but to be thrown out and trampled underfoot.

You are the light of the world. A city set on a mountain cannot be hidden.

Nor do they light a lamp and then put it under a bushel basket; it is set on a lampstand, where it gives light to all in the house.

Just so, your light must shine before others, that they may see your good deeds and glorify your heavenly Father.

In the above passage Jesus tells his disciples that by their deeds they are to influence the world for good. He tells them that if they fail in good works, they are as useless as flavourless salt or that they can no more escape notice than a city set on a mountain or as a lamp whose light is concealed.

The Simile of Salt

Also, in Mark we have a Simile of Salt.

Some manuscripts add “every sacrifice will be salted with salt” to the above verse.

The purifying and preservative use of salt in food,

and the refinement effected through fire refer here to comparable effects in the spiritual life of the disciples of Jesus.

In Luke too we have the Simile of Salt.

The simile of salt follows the sayings of Jesus that demanded of the disciple total dedication and detachment from family and possessions and illustrates the condition of one who does not display this total commitment. The halfhearted disciple is like salt that cannot serve its intended purpose.

When we say salt, we commonly refer to common salt, and its chemical name is sodium chloride (NaCl).

Common salt is used for many purposes – to add flavor to food; to draw out the water in foods; to cure food and keep it safe for a longer period; to create traction on icy roads etc.

Sodium Chloride (NaCl) is a very stable substance. The chemical bond between sodium and chlorine is very tight. From a chemical perspective, the only way for salt to lose its saltiness is for a chemical reaction to occur.

The unusual supposition by Jesus, of salt losing its flavor, has led some to suppose that the saying refers to the salt of the Dead Sea, that because being chemically impure, could lose its taste.

The Simile of Light