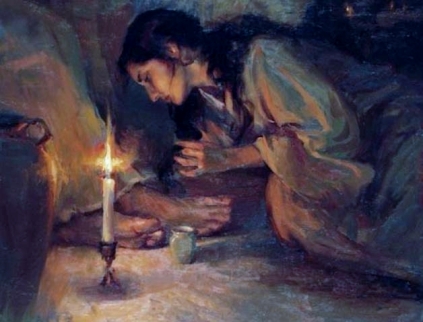 The Anointing at Bethany by Daniel F. Gerhartz

Six days before Passover Jesus came to Bethany, where Lazarus was, whom Jesus had raised from the dead. They gave a dinner for him there, and Martha served, while Lazarus was one of those reclining at table with him.

Mary took a liter of costly perfumed oil made from genuine aromatic nard and anointed the feet of Jesus and dried them with her hair; the house was filled with the fragrance of the oil.

Then Judas the Iscariot, one [of] his disciples, and the one who would betray him, said, “Why was this oil not sold for three hundred days’ wages and given to the poor?”

He said this not because he cared about the poor but because he was a thief and held the money bag and used to steal the contributions.

So Jesus said, “Leave her alone. Let her keep this for the day of my burial. You always have the poor with you, but you do not always have me.”

[The] large crowd of the Jews found out that he was there and came, not only because of Jesus, but also to see Lazarus, whom he had raised from the dead. And the chief priests plotted to kill Lazarus too, because many of the Jews were turning away and believing in Jesus because of him.

In today’s gospel reading John says this scene took place at Bethany on the Mount of Olives, a few miles from Jerusalem, in the house of Lazarus, Mary and Martha.

There is a similar scene of anointing found in Mark 14:3–9 and Matthew 26:6–13 (which is apparently is a copy of Mark’s narrative) enacted at Bethany in the house of Simon the leper.

When he was in Bethany reclining at table in the house of Simon the leper, a woman came with an alabaster jar of perfumed oil, costly genuine spikenard. She broke the alabaster jar and poured it on his head.

There were some who were indignant. “Why has there been this waste of perfumed oil? It could have been sold for more than three hundred days’ wages and the money given to the poor.” They were infuriated with her.

Jesus said, “Let her alone. Why do you make trouble for her? She has done a good thing for me. The poor you will always have with you, and whenever you wish you can do good to them, but you will not always have me. She has done what she could. She has anticipated anointing my body for burial. Amen, I say to you, wherever the gospel is proclaimed to the whole world, what she has done will be told in memory of her. (Mark 14:3-9)

Now when Jesus was in Bethany in the house of Simon the leper, a woman came up to him with an alabaster jar of costly perfumed oil, and poured it on his head while he was reclining at table.

When the disciples saw this, they were indignant and said, “Why this waste? It could have been sold for much, and the money given to the poor.”

Since Jesus knew this, he said to them, “Why do you make trouble for the woman? She has done a good thing for me. The poor you will always have with you; but you will not always have me. In pouring this perfumed oil upon my body, she did it to prepare me for burial. Amen, I say to you, wherever this gospel is proclaimed in the whole world, what she has done will be spoken of, in memory of her.” (Matthew 26:6-13)

In Luke 7 there is an incident of a penitent woman anointing Jesus which is different.

A Pharisee invited him to dine with him, and he entered the Pharisee’s house and reclined at table.

Now there was a sinful woman in the city who learned that he was at table in the house of the Pharisee. Bringing an alabaster flask of ointment, she stood behind him at his feet weeping and began to bathe his feet with her tears. Then she wiped them with her hair, kissed them, and anointed them with the ointment.

When the Pharisee who had invited him saw this he said to himself, “If this man were a prophet, he would know who and what sort of woman this is who is touching him, that she is a sinner.” (Luke 7:36-39)

So, we can conclude that these various episodes have become interchanged.

9 thoughts on “The Anointing at Bethany”